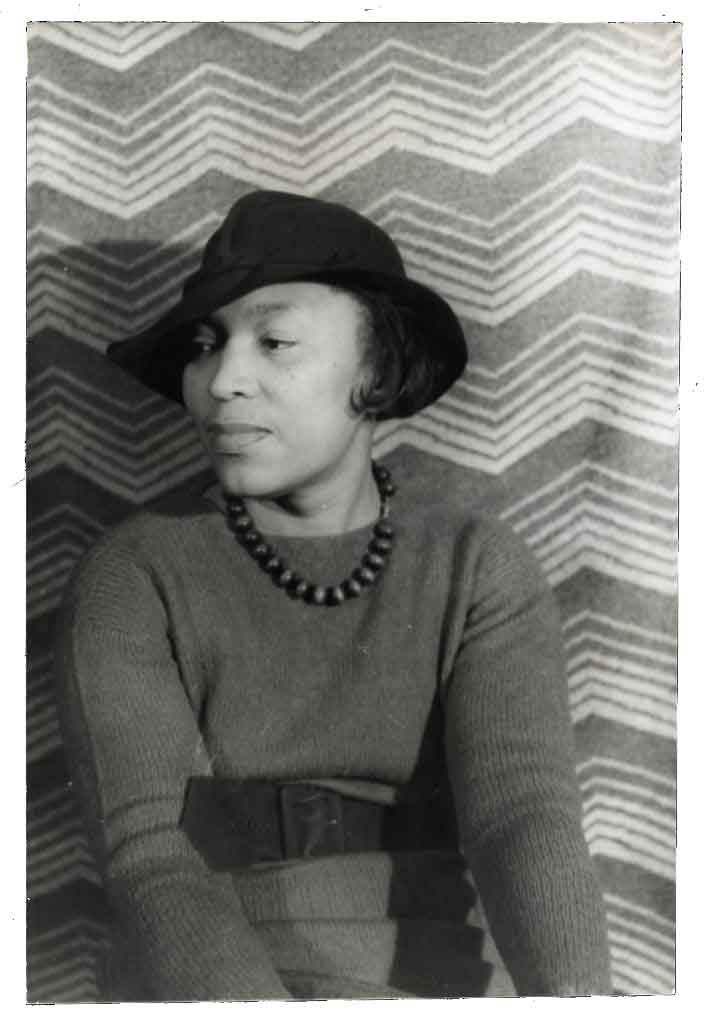 Zora Neale Hurston publishes Their Eyes Were Watching God, which is initially poorly received (including negative reviews from Alain Locke and Richard Wright). Years later, after Alice Walker’s 1975 Ms. magazine article celebrates the novel, it would become one of the most famous twentieth-century novels by a Black American woman.

“
Very truly and purely have I loved. With the exalted soul of the idealist,
And the fire of the ardent mortal, and hated with a strong man's hate.
In short, I have been altogether human.
‍
“Contentment"
Zora Neale Hurston (unpublished)
“
And one morning while in the woods I stumbled suddenly upon the thing,
Stumbled upon it in a grassy clearing guarded by scaly oaks and elms.
And the sooty details of the scene rose, thrusting themselves between the world and me...

“Between the World and Me"
Richard Wright, 1935 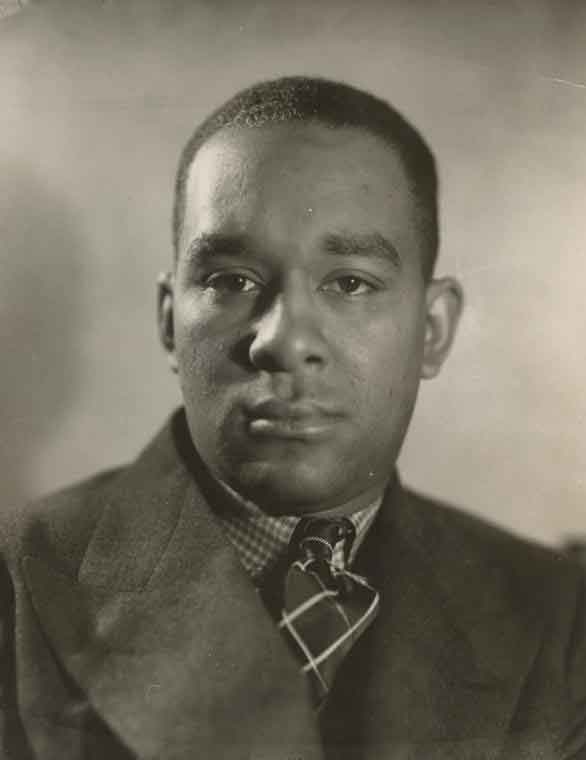 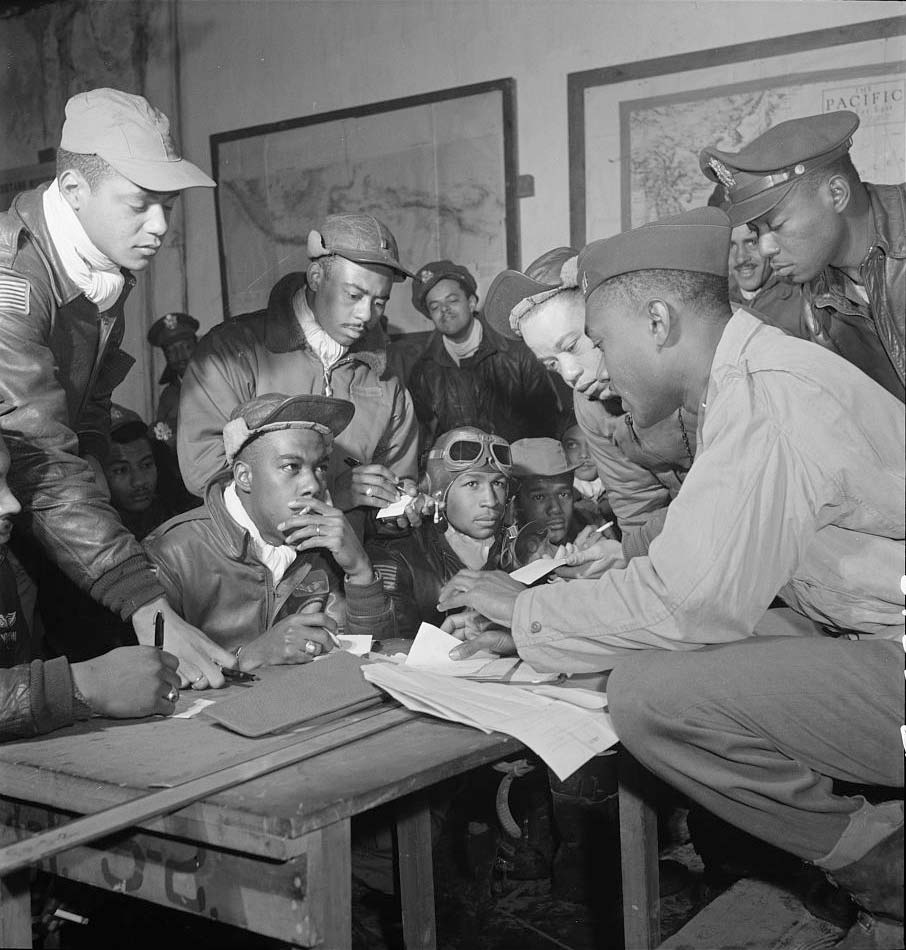 A group of Tuskegee airmen plan a mission in Remitelli, Italy, in March 1945.
The U.S. Army creates the Tuskegee Airmen, a unit of Black aviators that would become famous for its courage and skill in World War II.
“
Being black in America
was the Original Catch
So no one was surprised
by 22:
The segregated airstrips,
separate camps.
They did the jobs
they'd been trained to do.

“Lonely Eagles"
Marilyn Nelson, 1990
“
Silence the drums, that we may hear the burning
Of Japanese in atomic colorcinemascope,
And remember the stereophonic screaming. 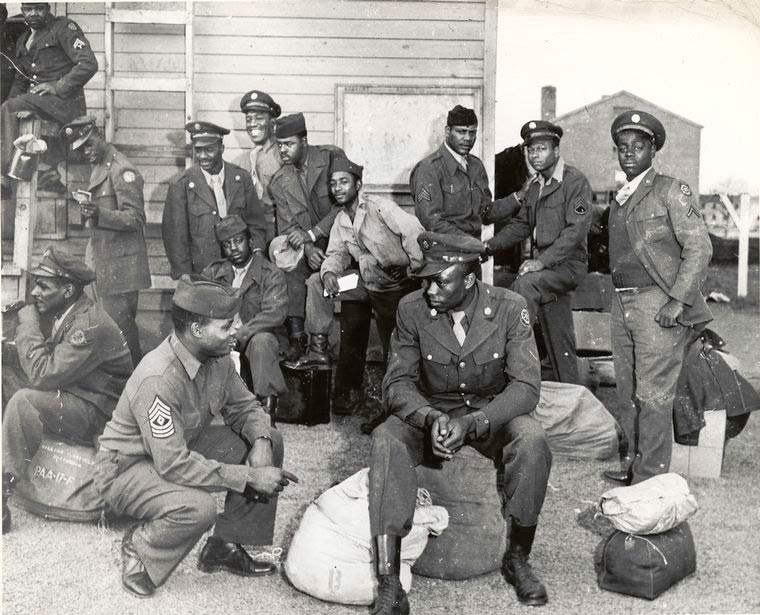 A group of Black soldiers preparing to return home in 1945.
The United States enters World War II. The armed forces are segregated throughout the duration of the war.
Samuel Allen is one of the many Black Americans to be drafted into the U.S. Army. He eventually becomes a lieutenant.
“
If the stars should fall,
I grant them privilege;
Or should they rise to brighter flame
The mighty Dog, the buckled Orion
To excellent purposes should gain--

“If the Stars Should Fall"
Samuel Allen, 1987
“
For my people lending their strength to the years, to the
gone years and the now years and the maybe years [...]

“For My People"
Margaret Walker, 1942
When her For My People wins the Yale Series of Younger Poets Competition, Margaret Walker becomes the first Black woman to win a national writing prize.
The activist-poet Julia de Burgos moves from Puerto Rico to New York City.
“
Ay, ay, ay, that am kinky-haired and pure black;
kinks in my hair, Kafir in my lips;
and my flat nose Mozambiques.

“Ay, Ay, Ay of the Kinky-Haired Negress"
Julia de Burgos, 1938
“
Abortions will not let you forget.
You remember the children you got that you did not get,
The damp smell pulps with a little or with no hair,
The singers and workers that never handled the air.

“The Mother"
Gwendolyn Brooks, 1945
Gwendolyn Brooks publishes her poetry collection A Street in Bronzeville, for which Richard Wright had provided a reader’s report.
Langston Hughes visits Russell Atkins’s high school, inspiring the latter and encouraging his poetry through their ensuing correspondence.
“
I sat with John Brown. That night moonlight framed
the blown of his beard like a portent's undivulged.

“Narrative"
Russell Atkins, 1968
“
A moment, please
What is it that to fury I am roused?
For still it takes a moment
what meaning for me [...] 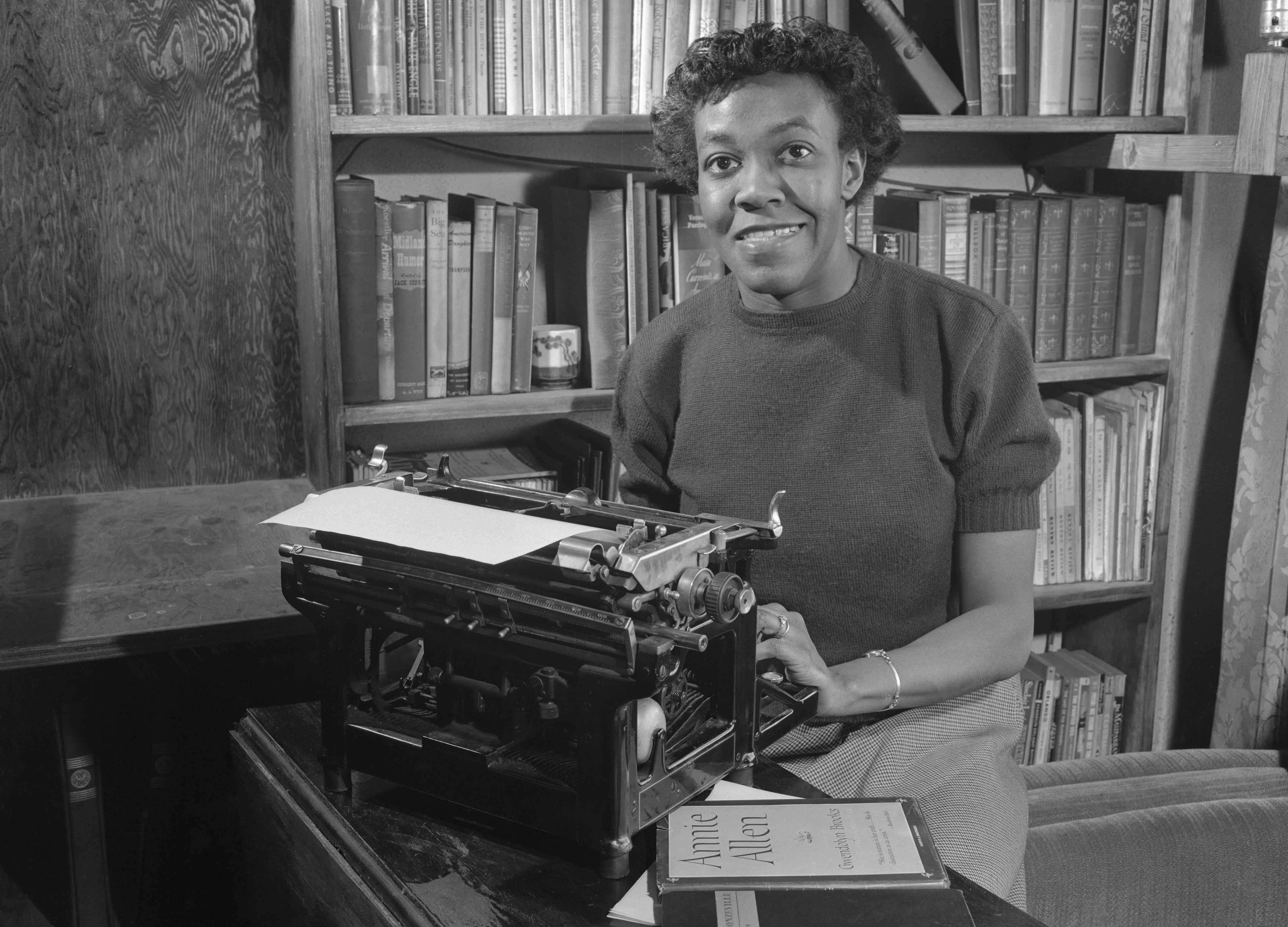 “Sadie and Maud"
Gwendolyn Brooks, 1945
“
One casts a crazed eye and the other's
closed dull
the heap twists up
hardening the unhard, unhardening
the hardened

“It's Here in The"
Russell Atkins, 1976
Russell Atkins co-founds his literary journal Free Lance, which becomes an important cultural venue.
Ted Joans, whose poetry would be heavily influenced by jazz, is roommates with Charlie “Yardbird” Parker in New York City.
“
Jazz is my religion
and it alone do I dig
the jazz clubs are my house of worship   and sometimes the concert halls
but some places are too commercial (like churches)

“Jazz Is My Religion"
Ted Joans, 1969
“
I called out his name
and he spun like a dancer, candy bar in hand,
looked at me quizzically for a moment before
remembering my face. he smiled. well
hello young lady. 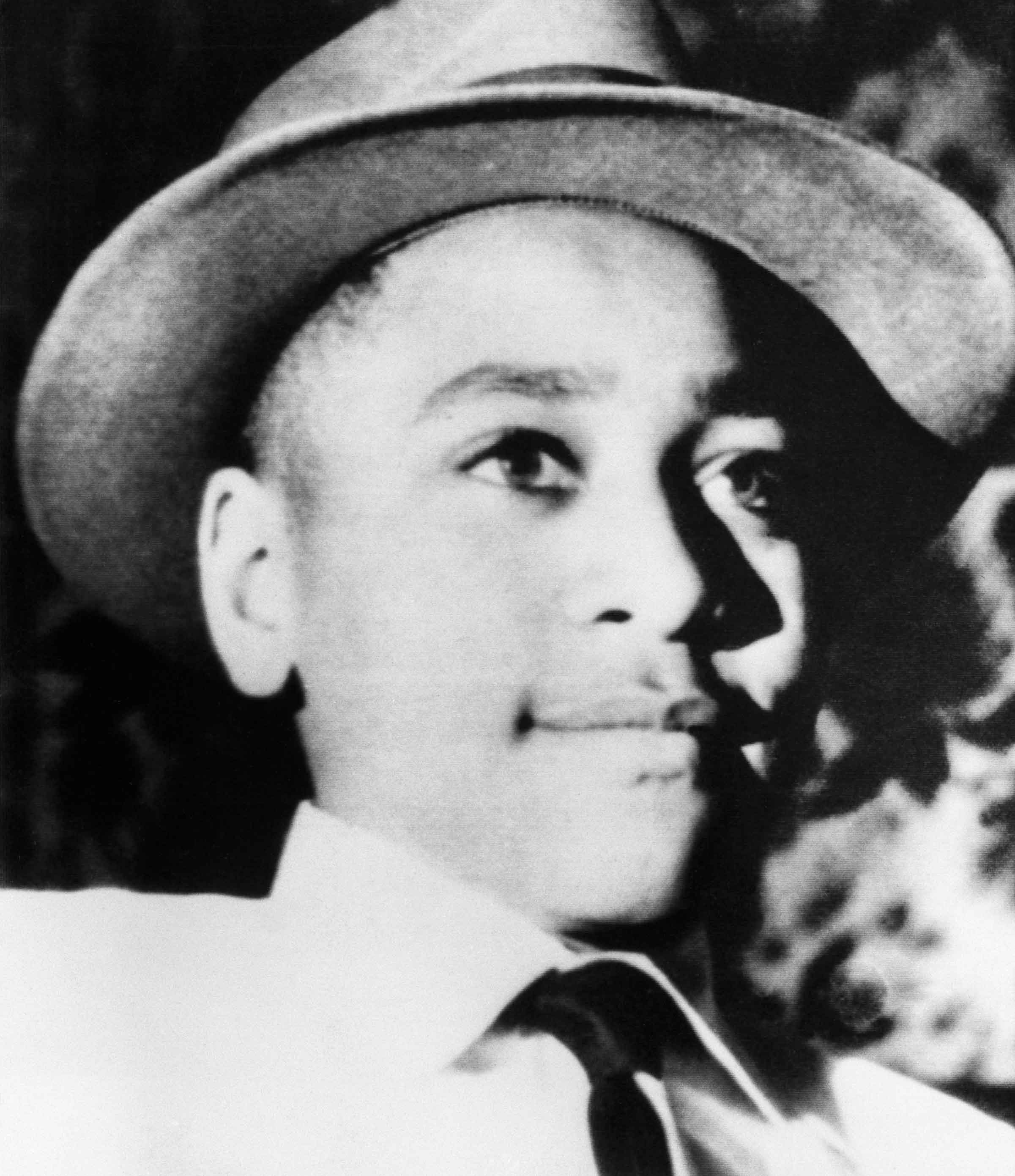 Emmett Till in an undated photo.
Accused of whistling at a white woman, a Black 14-year old named Emmett Till is lynched in Mississippi, provoking national outrage.

Gwendolyn Brooks’ 1960 poems “A Bronzeville Mother Loiters in Mississippi. Meanwhile, a Mississippi Mother Burns Bacon” and “The Last Quatrain of the Ballad of Emmett Till” respond to the brutal murder, as does Eve L. Ewing’s “I saw Emmett Till this week at the grocery store.”
“
The gradual dulling of those Negro eyes,
The sudden, overwhelming little-boyness in that barn?

“A Bronzeville Mother Loiters in Mississippi. Meanwhile, a Mississippi Mother Burns Bacon"
Gwendolyn Brooks, 1960
“
How she sat there,
the time right inside a place
so wrong it was ready.