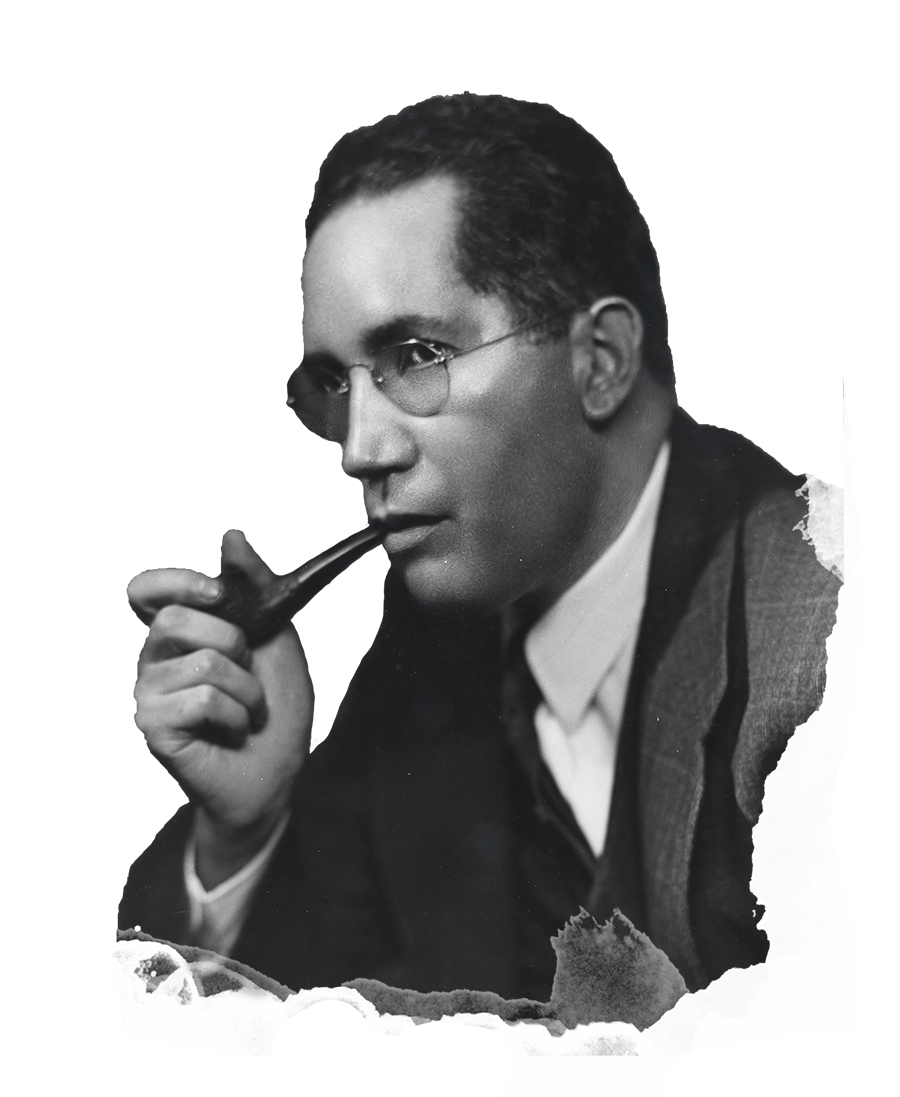 Though he is one of the lesser-known heroes of the Harlem Renaissance, Sterling Brown was one of the period’s most important ethnographers and one of few scholars in his time who treated Negro spirituals and other forms of Black music as valid art forms. Negritude poet and Senegalese president Léopold Sédar Senghor credited Brown for being “an original militant of Negritude, a precursor of our movement.”

Born in Washington, D.C. just after the turn of the century, Sterling Allen Brown was the youngest of six children and the only son born to a distinguished, middle-class Black family. His father was Reverend Sterling Nelson Brown, who was born a slave in Tennessee and, in the early-1890s, became a professor of theology at Howard University’s School of Religion. In the capital, the future clergyman met some of the most notable civil rights activists of the nineteenth century, including Frederick Douglass and Reconstruction-era Mississippi senator Blanche K. Bruce. Twenty-four years had passed since the hopes of Reconstruction had been dashed by the Compromise of 1877; but, the reformist energy of the Progressive Era fomented intellectual growth and the foundation of the first civil rights institutions, such as the American Negro Academy and the National Association of Colored Women’s Clubs, co-founded by Frances E.W. Harper. Reverend Brown used the newly founded Lincoln Temple Congregational Church, where he preached, to organize for progressive reforms.

Brown’s mother, Adelaide (née Allen) was also a Tennessee native and graduated as valedictorian from Fisk University. Adelaide wrote poetry and imposed an early literary and Black cultural influence on her son. She fostered his interest in Negro spirituals, which she developed while at Fisk and through the likely influence of her cousin, Georgia Gordon, one of the first Fisk Jubilee Singers. Due to his father’s presence on Howard’s faculty, Brown was raised on the Howard University campus in a home on Sixth Street and Fairmont and had the benefit of regularly meeting illustrious cultural figures, such as Alain Locke, Jean Toomer, and W.E.B. DuBois. The family library reflected both his mother’s love of literature and his father’s dedication to civil rights reform—volumes of poetry by Robert Burns, Henry Wadsworth Longfellow, and Paul Laurence Dunbar appeared alongside biographies of abolitionists and Carter G. Woodson’s history of Negro migration.

The richness of Brown’s cultural explorations at home only expanded at Dunbar High School, where his teachers included Angelina Weld Grimké, who was one of his English instructors, and Jessie Redmon Fauset, who taught Latin and French. His history teachers were Haley George Douglass, Frederick Douglass’s last surviving grandson, and Neville Thomas, president of the District of Columbia’s chapter of the NAACP.

When he was still 17, Brown was accepted into Williams College on an academic scholarship. The prestigious, private Massachusetts college funded the education of Dunbar High’s valedictorian each year. Brown perceived the college’s acceptance as a form of tokenism and quickly realized, soon after his arrival, that his race rendered him a non-entity to his white classmates. Worse, the college maintained a policy of segregating Black students from the white student body—alleging that it was for the well-being of the few Black students on campus. This isolation only reinforced the Black students’ sense of being unwelcome and made them hyperconscious of how their white classmates perceived them. Brown, therefore, socialized only with the small coterie of other young Black men who attended the school. In an essay, he would relate an anecdote about how uncomfortable it made the other Black students when he played Mamie Smith’s “Crazy Blues” in his room. Though they were all eager to listen to the music, they would only do so after midnight and with the blinds down in the windows.

Despite his discomfort with the racial isolation at Williams and the bitter cold of the Berkshire Mountains, Brown credits the college with fostering his ability to read literature critically. His most influential professor, George Dutton, taught in the English department but forced his students to read not only English novels, but also works by Gustave Flaubert, Leo Tolstoy, Fyodor Dostoevsky, and those by contemporary American modernists. Dutton’s instruction fostered a lifelong interest in literary criticism. Michael S. Harper noted that Brown became an expert on both Herman Melville and Mark Twain and later anthologized essays on Johann Wolfgang von Goethe and Charles Baudelaire.

Brown’s stellar undergraduate record won him a scholarship to Harvard, where he read poetry by Robert Frost, Edgar Lee Masters, Edwin Arlington Robinson, and Carl Sandburg. By this time, he had begun writing his own poems. In 1923, he graduated from Harvard with an MA in English. In that same year, he took his first teaching position at Virginia Seminary and College, where he remained for three years.

In 1924, Brown entered Opportunity magazine’s first literary contest, instituted by its editor Charles S. Johnson. He was awarded second prize, which included twenty dollars and publication in the June 1925 issue. He published a review of African American tenor Roland Hayes’s performance of Negro spirituals at a concert in Lynchburg, Virginia. First prize in the contest went to E. Franklin Frazier for “Social Equality and the Negro.”

In 1927, Brown married Daisy Turnbull, whom he had met during one of his visits to Roanoke, Virginia to see his friend and tennis partner Arthur Downing. Like Brown, Daisy came from a Black middle-class family. Also, like her husband, she rejected the snobbery that tainted their sliver of the Black community. Auburn-haired and light enough to pass for white, Daisy rejected the temptation to deny her Black identity, knowing that her skin color was a result of slavery. A native of Roanoke, Daisy had graduated from Virginia Seminary and College before Brown became an instructor there. After graduation, she worked for a year as a schoolteacher. She then moved to Philadelphia and became a receptionist but later returned to Roanoke to assist with raising the children of her sister, who had fallen ill. The Browns remained married for 52 years, until Daisy’s death in 1979, and had one son together, John L. Dennis.

Daisy encouraged her husband’s writing, pushing Brown to produce essays and poetry, even in instances in which he was plagued by doubts about the merit of his work. He entered another Opportunity magazine literary contest in 1927. This time, he submitted a dialect poem, “When De Saints Go Ma’ching Home,” and won first prize. In the same year, poet Countee Cullen anthologized six of Brown’s unpublished poems in Caroling Dusk (1927). Brown published additional poems in Opportunity, Crisis, and Contempo magazines. He was also featured in Charles S. Johnson’s anthology Ebony and Topaz (1927). Some of the work that he published in periodicals and anthologies would later be reprinted in his debut poetry collection, Southern Road, released in 1932.

Brown spent the mid-1920s teaching at Fisk and Lincoln Universities before he was appointed professor of American literature at Howard in 1929, where he remained for 40 years. In 1931, he published Outline for the Study of Poetry of American Negroes (1931), a companion book to James Weldon Johnson’s 1922 anthology, The Book of American Negro Poetry. In the mid-1930s, he also served as Editor of Negro Affairs for the Federal Writers’ Project, which had employed few Black writers. His work on the project allowed him to dismantle the stereotypes and historical distortions about Black people that were written into Southern states’ guidebooks.

In 1937, Brown was awarded a Guggenheim Fellowship. With the funds, he published two critical studies, The Negro in American Fiction and Negro Poetry and Drama. He also co-edited The Negro Caravan (1941), an anthology covering nearly 200 years of African American poetry.

In 1942, Brown was awarded a Julius Rosenwald Fellowship, which allowed him to go further in exploring the lives of Southern Black people. He began collecting their conversations and personal narratives, which would later comprise A Negro Looks at the South (2007), a posthumous collection of unpublished essays. Brown collected the material in the early-1940s, around the same time that he befriended the Swedish sociologist, Gunnar Myrdal. Brown assisted Myrdal from 1939 to 1940 with researching his study of the Negro in America (it would later become the seminal 1944 book, An American Dilemma: The Negro Problem and American Democracy), funded by the Carnegie Corporation of America. Brown became frustrated by the research team’s unwillingness to examine Black people’s lives beyond statistics. Arguably, the collected biographical essays, histories, and tales in A Negro Looks at the South, written in the vernacular in which the narrators spoke, were a rebuttal to Myrdal’s clinical study. The hodgepodge volume could also be read as a companion to Southern Road—another travelogue and ethnographic study that validated “black speech” as a mode of communication.

Brown attempted to publish a second volume of poetry, entitled “No Hiding Place,” but it was rejected by every publisher he approached. While continuing his tenure at Howard, he was also a visiting professor at Vassar College, the New School for Social Research, New York University, and the University of Illinois, Chicago.

Brown retired from Howard in 1969 and was awarded an honorary degree from the institution two years later—one of 13 that Brown received during his lifetime. In 1980, Brown finally published a second volume of poetry, The Last Ride of Wild Bill and Eleven Narrative Poems (1975). Five years later, he released Collected Poems. In honor of his work in depicting the richness and variety of the African American experience, the Black History Museum of Philadelphia published Sterling A. Brown: A UMUM Tribute (1982). Contributors to the literary tribute included poets Dudley Randall, Amiri Baraka, and Léopold Sédar Senghor. In 1984, the District of Columbia named Brown its poet laureate. He remained in Washington until his death from leukemia at age 87.

Poems by sTerLiNg A. BroWn