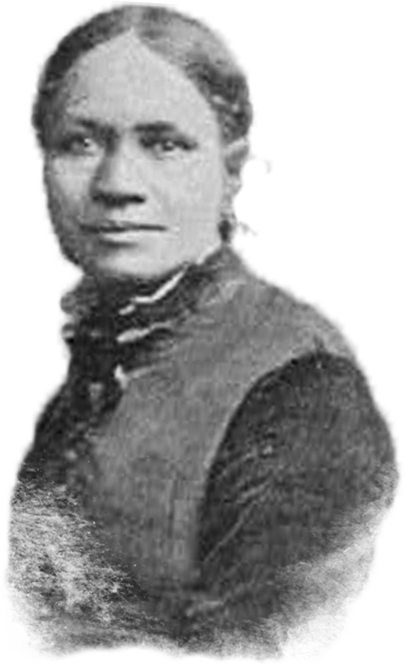 Born free in Baltimore, Maryland and orphaned before age three after her mother’s death, Frances E. W. Harper was raised in a middle-class household by her maternal uncle, the reformer and clergyman, William Watkins, and his wife, Henrietta. The impact of Harper’s mother’s death would permeate some of her poetry, in which she explored the psychic impacts of children being wrenched away from their enslaved mothers and sold to separate plantations during the antebellum years. Though she had never experienced slavery, Harper used this early tragedy to align herself with those in bondage.

Harper was educated at her uncle’s Academy for Negro Youth in Baltimore. While there, she engaged in rigorous lessons on Classical and Modern languages, the Bible, geography, philosophy, mathematics, music, and rhetoric. Her formal education ended in 1839. Harper took work as a domestic and seamstress, in the employ of a bookseller named Mr. Armstrong, who gave Harper access to his book collection. Harper used the collection to continue her studies and, around the same time, began writing poetry.

In 1850, she moved to Ohio and became the first female instructor in domestic science at the African Methodist Episcopal Church’s Union Seminary (later, Wilberforce University). Around this time, she may have met her future husband, Fenton Harper. In 1852, Harper left Wilberforce and moved to Little York, Pennsylvania to accept a teaching job there. In the following year, Maryland enacted a law that endangered any person of color, particularly free blacks, who entered the state from its northern border. To avoid being sold into slavery, Harper settled in Philadelphia. In her new city, she became involved with abolitionism and lived at an Underground Railroad “station.”

During this initial phase of her abolitionist efforts, Harper worked as a lecturer and activist for the Pennsylvania Anti-Slavery Society. She then joined the Maine Anti-Slavery Society in 1854 as an orator. Around this time, she began writing poems and essays, including “The Dying Christian,” “Ethiopia,” “Eliza Harris,” and “Women’s Rights.” She published her first collection, Forest Leaves, in the 1840s. This pamphlet of poems was assumed to have been lost to the public for over 150 years until Johanna Ortner, a doctoral student, rediscovered the slender volume in Maryland Historical Society’s archives. Many of these early poems reappeared in Harper’s second collection, Poems on Miscellaneous Subjects (1854) in slightly altered forms, while ten of those featured in Forest Leaves were previously unpublished. Half of the recently rediscovered poems explore Harper’s interests in religion and Christianity—recurrent themes in her work. In Poems on Miscellaneous Subjects, she expanded her oeuvre with the inclusion of essays. Poems collected in this second volume deal not only with religion but with women’s rights, African American history, and temperance.

In 1858, Harper physically immersed herself in activism when she joined a sit-in to protest the segregation of streetcars in Philadelphia. In that same year, her uncle, William Watkins, died, and Harper composed one of her best-known poems, “Bury Me in a Free Land.” Her activism included the pursuit of aid for the revolutionaries captured during John Brown’s raid of Harper’s Ferry in Virginia. She also contributed articles to numerous abolitionist journals, including William Lloyd Garrison’s the Liberator and Frederick Douglass’s Monthly.

Harper edited the earliest known African American literary journal, the Anglo-African Magazine. For the journal, she wrote what is believed to be the first short story published by an African American woman living in the United States, “The Two Offers” (1859). An early feminist work, “The Two Offers” examines the lives of two cousins—Laura Lagrange and Janette Alston. The first young woman weighs two marriage proposals, while the latter aspires to a writing career. While Harper acknowledged the class differences between the women, she never determined the race of either. Harper used the story as a vehicle to explore the problem of sexism among people of all races, as well as the pervasive tendency to glorify women’s domestic roles at the expense of their intellectual development.

“The Two Offers” might reflect Harper’s own ambivalence around having both a successful career and a happy marriage. In 1860, she married Fenton Harper, who was already a father of three. With the income that she earned from her lecture tours, the couple bought a small farm outside of Columbus, Ohio. Soon thereafter, Harper gave birth to a daughter, Mary. Fenton died on May 23, 1864. His unpaid debts led to a court order to seize Harper’s farm. In need of income, Harper left her stepchildren in the care of their relatives and took Mary to the Northeast, where she resumed lecturing.

During Reconstruction, Harper traveled to nearly every Southern state (Texas and Arkansas were exceptions) to lecture and to teach former slaves to read. She also railed against the lynching of Black people in the South. Her activism in this arena made her a mentor to future anti-lynching activist Ida B. Wells-Barnett.

Harper was such an extraordinary orator that some people refused to believe that she was a Black woman. It has been said that she could speak for up to two hours without notes and seldom gestured as she spoke. Some onlookers insisted that she was a man dressed as a woman, while others believed that she was a white woman painted brown. Despite her allegiance to women’s rights Harper’s polished style and strong intellect drew the ire and resentment of some white suffragists who could not accept Harper’s departures from racial stereotypes. In 1866, she delivered a speech on the relationship between women’s rights and civil rights for African Americans at the first meeting of the American Equal Rights Association.

Harper’s other published works include the serialized novel, Minnie’s Sacrifice (1867-68), the biblical epic, Moses, a Story of the Nile (1868), the poetry collection Sketches of Southern Life (1870), and the novel Trial and Triumph (1888). She released three additional poetry collections in 1895: Atlanta Offering, Martyr of Alabama and Other Poems, and Poems. She is best-known for her novel, Iola Leroy or Shadows of the Uplifted (1892), which she wrote as a challenge and corrective to the romantic revisionist histories of plantation life written by Thomas Nelson Page and other white novelists who wrote in the “plantation tradition.”

While lecturing for the Women’s Christian Temperance Union, Harper railed against segregated chapters within the organization. In response to rampant discrimination within women’s rights organizations, she helped found the National Association of Colored Women. In 1894, she became director of the American Association of Educators of Colored Youth. Harper returned to her adopted home of Philadelphia at the end of her life. She died there of heart disease.

Though her poetry may not display the aesthetic genius of Phillis Wheatley, or Albery Allson Whitman’s dexterity with multiple poetic forms, Harper was effective in using verse to facilitate political outcomes. Her efforts in abolitionism, the suffrage movement, and in warning the public about the perils of alcohol abuse were instrumental in fostering some of the social changes that Harper did not live long enough to witness.