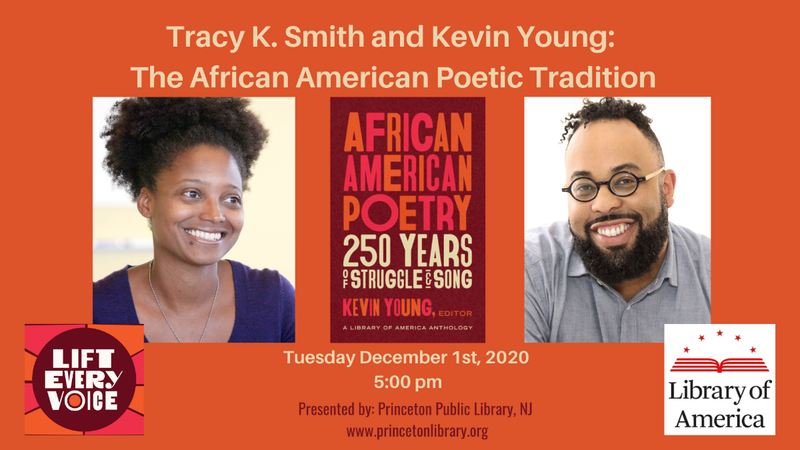 Poets Tracy K. Smith and Kevin Young discuss the African American poetic tradition and read from their own works, as well as those from other poets featured in the recently released African American Poetry: 250 Years Of Struggle & Song.

A literary landmark, this volume, edited by Young, is the most ambitious anthology of Black poetry ever published, gathering 250 poets from the colonial period to the present. One of the great American art forms, African American poetry encompasses many kinds of verse: formal, experimental, vernacular, lyric, and protest.

This event is the launch of a series of programs and discussions to be held through February 2021 by the Princeton Public Library as part of the Library of America's Lift Every Voice project and website.

Tracy K. Smith served as the 22nd United States Poet Laureate from 2017 to 2019 and is the author of four acclaimed collections of poetry, including, most recently, Wade in the Water (Graywolf, 2018) and Life on Mars, which received the Pulitzer Prize for Poetry in 2012. Her memoir, Ordinary Light, was a finalist for the National Book Award for Nonfiction in 2015.  Smith serves as the chair of the Lewis Center for the Arts at Princeton University, and also hosts the daily poetry podcast The Slowdown.

Kevin Young is the director of the Schomburg Center for Research in Black Culture and poetry editor of the New Yorker, where he also hosts the poetry podcast. He is the author of thirteen books of poetry and prose, most recently Brown (Knopf, 2018).  He is a member of the American Academy of Arts and Sciences and was named a Chancellor of the Academy of American Poets in 2020. He will be the director of the Smithsonian's National Museum of African American History and Culture starting in January 2021.